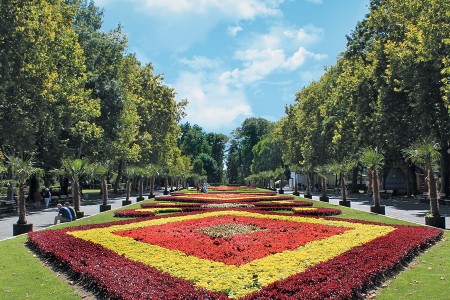 Burgas is a beautiful coastal city in southeast Bulgaria, that lies on the Black Sea Coast and very close to Sunny Beach, the most popular beach resort in Eastern Europe.

Burgas is a relatively new city that was developed only in the 19th century. But the areas in and around Burgas, such as Nessebar, have witnessed the rise and fall of many civilizations over a period of 2,000 years or more.

Holidaying in Burgas is a lot of fun for the whole family. Burgas has many beaches and Sea Garden in particular is very child friendly. There are a number of museums and archaeological sites in Burgas.

We discuss the top 5 must see spots in Burgas, but first – did you book your hotel in Burgas Bulgaria yet?

#1: Mosta – Mosta is Burgas’ most popular structure. It is a pier that stretches from the edge of the Sea Garden into the Black Sea for over 300 metres. Its distinctive “T” shape makes it look very photogenic indeed. A number of locals and holidaymakers in Burgas love taking a long walk on the Mosta. It gives them an excellent view of the Black Sea. A number of adventurous young men dive off the Mosta into the waters below– this is a popular sport in Burgas.

#2: Sea Garden – The Sea Garden is a large seafront park which has many facilities for families such as amusement parks, sports facilities, gardens and a cultural centre. It covers over 72,000 square metres and consists of a wooded parkland, a large open air theatre, beautiful promenades with fountains, cafes, tennis courts, ice cream stands, , tennis courts and more.

#3: St. Anastasia Island – The St. Anastasia Island is a natural wonder that is just a few kilometres from the Mosta. It is the largest inhabited island in Bulgaria. You will enjoy walking on the island – it is quite small, so you will be able to see most of it within not more than 30 to 45 minutes. There are only a few structures here such as a restaurant, a museum, a lighthouse and guesthouses. St. Anastasia was once a prison, but is now a popular spot for tourists who want a little privacy.

#4: Burgas Galleria – When in Burgas, you will want to go out shopping, in which case the Burgas Galleria is the ideal spot for you. It is a large three-storey air conditioned shopping mall with a multiplex where you can catch up with the latest Hollywood blockbusters and hosts a number of high street brands such as Zara, H&M and Benetton. The food court here is delightful as well, as are the fast-food chains.

#5: Archaeology Museum – The Archaeology Museum in Burgas is worth a visit. It was a schoolhouse in the 19th century, but now exhibits the hidden treasures of the Ancient Thracian civilization, including artefacts excavated from the tomb of a Thracian princess. You will find the maritime tools from the Bronze Age settlement that was discovered close to Burgas very interesting as well. The Minoan bronze ingots are worth a watch as well.