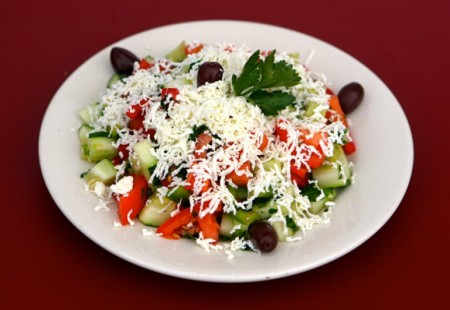 The best part of visiting Bulgaria is the delectable Bulgarian cuisine. Bulgarian food is rich in flavour, comes in several different variations, colours and forms. It is distinctly Mediterranean, and yet retains its unique flavour and taste.

Above all Bulgarian foods are delicious, sumptuous and healthy. When looking for a hotel in Bulgaria, find one that is close to restaurants and eateries that serve authentic Bulgarian food.

#1: Shopska Salata – The Shopska Salata is Bulgaria’s favourite dish. It is simple, easy to prepare and just perfect for the summer. It looks very simple, some people would wonder about what’s the big deal made about a salad that consists of some chopped vegetables. But the Shopska salata is much more than that. It consists of a Bulgarian white cheese called Sirene that gives it a special flavour. Sirene is made from special bacteria that exist only in Bulgaria. Be sure to order the Shopska Salata during your visit to Bulgaria.

#2: Tatator – Tarator is everybody’s favourite yoghurt soup in Bulgaria. It consists of fresh cucumbers, walnuts, Bulgarian yoghurt and water. It is incredibly refreshing and perks you up after a full day spent shopping or hiking.

#4: Banitsa – Banista or banichka as it is called is one of the tastiest Bulgarian foods. It is made with cheese, eggs and yoghurt and consists of several different variations, some of which include pumpkin and spinach. Banichka is a smaller version of the Banitsa. Banichka is available in most bakeries in Bulgaria. It is the most authentic Bulgarian breakfast.

#5: Meshana skara - Meshana skara  is everybody’s favourite meat dish in Bulgaria. Bulgarians love meat and Meshana skara is one of the most delectable meat dishes you will ever have. It consist of kyufte (meatball), pork steak, kebabche (grilled minced meat, long), shishche (skewer), and finally, karnache (Italian sausage). For best effect, garnish it with Rakia and the Shopska Salata.

#6: Moussaka – The Bulgarian Version. Moussaka is originally a Middle Eastern dish which was introduced into Bulgaria by the Ottomans who ruled here for over 500 years. The Bulgarian version of the Moussaka consists of potatoes, ground meat with yoghurt layer on top. Everybody we know love the Bulgarian Moussaka because it is both tasty and easy to cook.

#7: Rakia - Bulgaria’s national drink. Rakia is every Bulgarian’s favourite alcoholic drink. It is popular across the Balkans and is available in every restaurant or bar in Bulgaria. We recommend trying out Rakia at least once. It adds to the taste of the Shopska Salata or Moussaka and should be taken along with them.